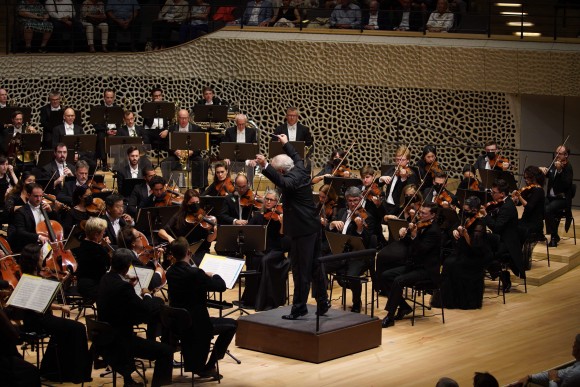 Late summer sees the migratory flights of big-name orchestras. The Berliner Philharmoniker, the LSO, the Concertgebouw, Rotterdam, Cleveland, Philadelphia, and the LSO, to name just a few, are currently or will shortly be on the road. The Pittsburgh Orchestra’s Hamburg concert last night was part of a nine-city European tour with its chief conductor, Manfred Honeck.

Why do orchestras tour? Germany is not short of decent orchestras. Can Pittsburgh do anything that Berlin cannot?

Perhaps this is like asking why you need one friend when you have another. For all the talk about the internationalisation of orchestral culture, each symphony orchestra does boast a distinctive sound, and can shed new light on old works.

In the end, though, orchestras tour primarily for themselves. And it was increasingly clear in the course of Wednesday’s concert in Hamburg’s iconic Elbphilharmonie that the players relished a hall where they could play as loudly as humanly possible without causing acoustic havoc.

But Honeck did not often let them loose. Much of his time was spent crafting fantastic pianissimi, showing fanatical control and remarkable precision.

Ligeti’s 1967 Lontano presents the orchestra in shimmering waves of sound. It is hard not to picture Kubrik’s cinematic images with Ligeti’s score (Lontano has much in common with Atmosphères, though the film-maker, for all that he boosted awareness of Ligeti’s music, seemed barely to respect the composer – he used the score without paying, later settling out of court with a one-off fee of US$3000.

That Ligeti’s music is worth more was apparent in every note.

Ravel’s G major piano concerto with Helène Grimaud showed an orchestra that is light on its feet, fast with its responses, and at home with Ravel’s jazz references. Grimaud’s playing is clean and articulate, athletic and translucent; neither she nor Honeck have time for sentimentality.

In Mahler’s first symphony, Pittsburgh showed that it can be at least Viennese as it is American. Honeck, conducting without a score, shows more interest in Mahler’s black, biting humour than he does in anything numinous. His Mahler, attentive to the score’s many tempo indications, has both velvet delicacy and sledge-hammer violence. It is spectacular without being cultish; Honeck revels in the score’s sardonic moments, but also lets us glimpse vulnerability between the bar-lines.

Honeck, who has been with the orchestra for 15 seasons, has just had his contract extended until 2027/28, and it’s easy to see why. The orchestra feels secure with him, and implicitly trusts his downbeat – trite though it may sound, this is rare. Together, they can find depth and nuance in a score, and explore the acoustic vagaries of the world’s leading concert halls.

Is this tour worth its US$3 million price-tag? You would have to ask the players. From its enthusiastic response, the Hamburg audience clearly thought so.