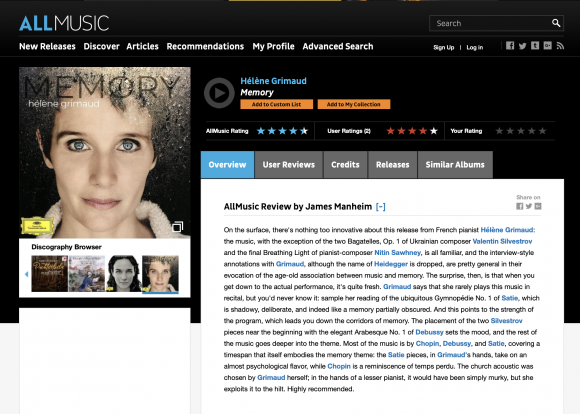 On the surface, there’s nothing too innovative about this release from French pianist Hélène Grimaud: the music, with the exception of the two Bagatelles, Op. 1 of Ukrainian composer Valentin Silvestrovand the final Breathing Light of pianist-composer Nitin Sawhney, is all familiar, and the interview-style annotations with Grimaud, although the name of Heidegger is dropped, are pretty general in their evocation of the age-old association between music and memory. The surprise, then, is that when you get down to the actual performance, it’s quite fresh. Grimaud says that she rarely plays this music in recital, but you’d never know it: sample her reading of the ubiquitous Gymnopédie No. 1 of Satie, which is shadowy, deliberate, and indeed like a memory partially obscured. And this points to the strength of the program, which leads you down the corridors of memory. The placement of the two Silvestrovpieces near the beginning with the elegant Arabesque No. 1 of Debussy sets the mood, and the rest of the music goes deeper into the theme. Most of the music is by Chopin, Debussy, and Satie, covering a timespan that itself embodies the memory theme: the Satie pieces, in Grimaud‘s hands, take on an almost psychological flavor, while Chopin is a reminiscence of temps perdu. The church acoustic was chosen by Grimaud herself; in the hands of a lesser pianist, it would have been simply murky, but she exploits it to the hilt. Highly recommended.